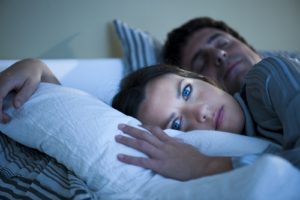 The average adult may need 7-9 hours of sleep to function at their best, but the actual quality of sleep is what matters there. Sleep interruptions, being jarred awake, snoring, and loss of breath can all significantly affect and reduce your actual sleep time and even lead to potentially dangerous consequences. Approximately 22 million Americans are estimated to suffer from sleep apnea, and 80% of the moderate-to-severe cases are expected to be undiagnosed. The good news is the condition is easily diagnosed and treated. Sleep apnea treatment can range from needing a Positive airway pressure (PAP machine) to simply needing to visit your Red Bank dentist to pick up a special mouth guard or mouth device to improve nighttime breathing. But before you can get an actual professional diagnosis for sleep apnea, it’s important to know some major symptoms.

Depression, Mood Swings, or Ongoing Irritability
Mental health issues should never be taken lightly, but depression, mood swings, and irritability aren’t always a mental health issue. Sometimes they’re caused by stress and/or lack of sleep. This is especially the case when the mood or behavioral changes are random, sporadic, or have increased recently. If you feel there’s a connection with your moods and sleep patterns, a visit to your doctor or Red Bank dentist may be in order.

Your Night Breathing Pauses or Stops
Obstructive Sleep Apnea (OSA) is marked by the fatty tissues of the tongue relaxing and falling back into the throat. The throat then closes around it, forcing an obstructed breathing pathway. In many cases, breathing either pauses briefly or stops until the brain sends distress signals and forces the body to jolt. Most of the time the pause only lasts a few seconds, and the person remains asleep and unaware of the change. But in some cases, the lack of or reduced oxygen can be ongoing or extensive and lead to serious health concerns like high blood pressure or cardiovascular disease.

You’re Consistently Tired or Wake up with Headaches
You may set your alarm every night to ensure you get those precious 7-9 hours of sleep. But if you’re waking up multiple times throughout the night due to air loss, that’s significantly reducing your actual sleep time. Difficulty waking up, being sluggish or tired throughout the day, and concentration issues are major signs that there’s a problem. Low levels of oxygen also widen blood vessels and cause vascular headaches. So if you have regular headaches after waking up, sleep apnea may be the culprit.

You Snore
Snoring isn’t always a sign of sleep apnea, but it’s one of the biggest symptoms of those suffering from the condition. According to studies, 30% of adults over the age of 30 and 40% of adults over the age of 40 snore. And 28% of those snorers have sleep apnea. However, there’s a difference between a gentle, droning snore and a loud, obnoxious rumbling that wakes up your partner and potentially the entire household. If your partner is complaining that you snore on an ongoing or nightly basis, you probably do. And that may be worth a visit to your Red Bank dentist to diagnose and discuss the right sleep apnea treatment. 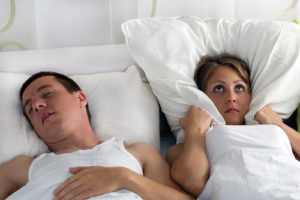 At least 50 million Americans have a sleep disorder, and over 22 million adults are impacted in some way by sleep apnea. Over 10% of Americans are estimated to suffer from Obstructed Sleep Apnea (OSA). While OSA is the most prevalent type of sleep apnea, up to 80% of moderate-to-severe cases are never diagnosed.  However, ignoring sleep apnea or putting off the treatment is a dangerous decision that can have dire consequences far more severe than fatigue, snoring, or being in a lousy mood the next day. In fact, some side effects of sleep apnea can be potentially fatal. But what are the most common sleep apnea side effects?

Nationwide stress rates are through the roof, so it may seem like everywhere you turn someone’s either depressed or has anxiety issues. While “everyone” is quite the stretch, the truth is anxiety and depression are the most common mental illnesses affecting 18.1% of the adult population or 40 million adults. Although they’re completely treatable in most cases, fewer than 40% of those suffering bother seeking treatment. And while there are several risk factors for depression and anxiety, they’re heavily linked to sleep apnea. However, treating your sleep apnea with a continuous positive airway pressure may significantly reduce your depression as well.

If you or a loved one seem to sound like a chainsaw during your sleeping hours, you have a higher risk of sleep apnea. Moreover, your chances of developing high blood pressure and heart disease just went through the roof. Medical science isn’t completely sure why there’s a strong link between heavy snoring and high blood pressure. But research does seem to prove that the blocked airway and extra effort applied to breathing likely put extra stress on many of your organs, including your heart. The good news, however, is that the reverse is also true. So if you have your snoring treated or corrected, it should help reduce your blood pressure.

A stroke, also known as a brain attack, occurs when the blood flow is cut off to a certain area of the brain. Brain cells then begin dying because the brain doesn’t receive enough oxygen. Bodily functions quickly begin to shut down, and severe confusion, paralysis, or even death can follow. There are several major risk factors for stroke, but the main ones include obesity, smoking, living a sedentary lifestyle, and sleep apnea. Improve your life choices and treat your apnea to reduce your risk of having a stroke.

It’s no secret that obesity and type 2 diabetes go hand-in-hand. But it may come as some surprise that those with Obstructed Sleep Apnea tend to have higher glucose levels. Once again, however, that link can work either way. So treating your sleep apnea may help reduce your blood sugar levels. While there are plenty of other risk factors, these are the most common sleep apnea side effects. Talk to your Red Bank Dentist about treating your OSA to see a huge improvement in the quality of your life.